The first segway of pakistan

The future of human transportation might be flying carpets and we would probably drive them by our thoughts, but not yet. The scientific community is continuously striving for environment friendly alternatives to our everyday vehicles. A vehicle, energy efficient, and pollution free which takes up no more space than a pedestrian, can change the way we think about human transportation. Another challenge is to follow the user’s natural means of expressing and feeling movement rather than cumbersome user interfaces. 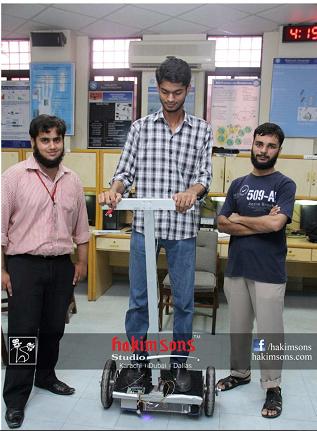 Are we there yet?

We are moving towards personalization of every device as technology progresses further and this fashion is now in the field of vehicles too. In 2001, a US “inventor” and entrepreneur, Dean Kamen – founder of FIRST (For Inspiration and Recognition of Science & Technology), invented a scooter that eventually became what is known today as the Segway™. It has a top speed of 20 km/h and was codenamed Ginger and Reinventing the wheel. Segway™ created a lot of hype and speculations as many notable experts envisioned it as a society-revolutionalizing product. Although it did not have as much of an impact as expected, it remains to be an engineering marvel. In 2008, Toyota Motors showed off a new stand-up scooter – the Winglet – that could one day be seen zipping alongside the Segway on the personal-transporter superhighway. Honda took a step forward in 2010 and unveiled its U3-X where “U” stands for unicycle and universal. Elektor also has an Open Source People Vehicle project.

The common attribute in all of them – Self Balancing.

Control systems aim for one enormous goal: Stability. An inverted pendulum is a classic control systems problem which is inherently unstable, and must be actively balanced in order to remain upright. A simple demonstration is that of balancing an upturned broomstick on the end of one’s finger. Put this concept in a dynamic environment and you have a balancing platform that moves around carrying a person.

About Self Balancing Vehicles

They normally have two parallel wheels on the sides and controlled by moving body weight. The rider stands on a platform between the two wheels holding on to a handlebar. To move forward/backward the rider will simply lean and the vehicle will sense and start moving in that direction. When weight is equal in both directions, it will remain static. Similarly, a left or right tilt will turn the vehicle. Standing on the platform, the rider feels completely in control of their movements, using it is totally intuitive. It is the combined effort of human mind and the vehicle controller that makes it stay in balance. How it works it balances by detecting the tilt, then moving forward or backwards automatically to regain balance. The tilt, is the main control variable here. It is the angle difference from the balanced condition. The corrective action the vehicle takes will depend on how far it is from balanced, how quickly it is changing and how long it’s been that much unbalanced. This, in effect is a Proportional-Integral-Derivative (PID) Controller.

Measuring tilt used to be a difficult task and state-of-the-art technology was used in aircrafts and ships until Micro Electro Mechanical Systems (MEMS) got cheap. This paved the way for hobbyists to make DIY Segways and soon enough, we followed their elegantly simple methods. An accelerometer which is commonly used in mobile phones these days (“but you can’t ride an iPhone”) and a gyroscope are needed for this purpose. The accelerometer measures acceleration and continually determines the direction and magnitude of gravity it is sensing. With that and a little trigonometry, we can use our microcontroller to estimate the angle of our platform. But once our vehicle starts moving, there are new accelerations involved and estimated angle becomes inaccurate. Now, a gyroscope, which measures the rate of change of angular displacement (dθ/dt) gives us readings which we can numerically integrate to get the platform angle while moving. Gyros, however, are not reliable when static and their integrals are likely to drift over time. Since none of them alone can be trusted to give a precise angle always, a simple sensor fusion technique known as the complementary filter is employed. Once we have calculated the angle, a PID controller generates and sends a Pulse Width Modulated Signal to the MOSFET driver circuit which adjusts the speed of the DC Motors by switching them at a high frequency. Steering commands are translated into equal magnitudes being added and subtracted from speed of each motor respectively. This way, the vehicle can even spin around on its axis like a tank. 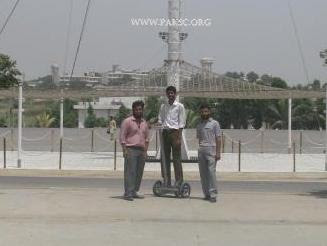 What good it will do

Technology is expensive and these vehicles will not be zooming around overnight. Such kind of vehicles can be used to travel indoors within airports, shopping malls, offices etc. Dean Kamen imagines them everywhere: in parks and at Disneyland, on battlefields and factory floors, but especially on downtown sidewalks from Seattle to Shanghai. And…. it’s fun. Such vehicles will ultimately make way to our country as well. How our society and cities will react to it, we don’t know. The engineering community, however, encouraged and appreciated this one small step we took in this direction. For details on our project, visit http://subukraftar.blogspot.com

Download attachments: The first segway of Pakistan by nust students